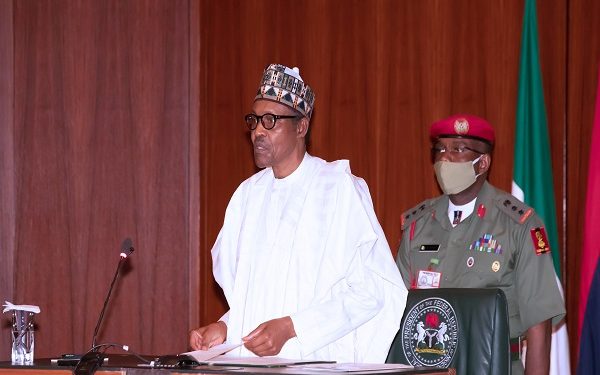 To this end, he had charged the partners in the project, including the Nigerian National Petroleum Corporation (NNPC), to keep focus on the target, reminding them that the AKK project was key to the delivery of the administration’s Next Level Agenda for sustainable development, enhancement of economic prosperity and increase of the country’s infrastructure assets.

Speaking at the virtual flag-off ceremony of the construction phase of the project at the Ajaokuta, Kogi State and Rigachikun, Kaduna State camp sites simultaneously, President Buhari said the project was very dear to the people of Nigeria and must succeed.

He directed the governors of Kogi and Kaduna states; Yahaya Bello and Nasir El-Rufai, who were respectively physically present at the two sites, to flag the commencement of works at Ajaokuta and Rigachikun sites off on his behalf, while he watched remotely via video-conference from the Council Chamber of the State House in Abuja.

“We promised the Nation that we will expand the critical gas infrastructure in the country to promote the use of gas in the domestic market. These include the Escravos to Lagos Pipeline System – 2 (ELPS-2), Obiafu to Obrikom (OB3) pipeline and AKK. These projects are fundamental to our desire to industrialize and energize the entrepreneurial spirit that is ever present in our population,” the President said.

Enumerating the benefits of the project, billed to be completed in two years, the President said it will provide gas for generation of power and for gas-based industries which would facilitate the development of new industries.

It will also ensure the revival of moribund industries along transit towns in Kogi State, Abuja (FCT), Niger State, Kaduna State and Kano State, he said, adding that the cascading effect and impact of the AKK, when operational, will be immeasurable

His words: ‘‘It has significant job creation potential both direct and indirect, while fostering the development and utilization of local skills and manpower, technology transfer and promotion of local manufacturing.’’

President Buhari announced that Nigeria had learnt invaluable lessons from the global COVID-19 pandemic and some oil rich countries that have used their crude as a pathway to economic and industrial diversification.

On COVID-19, the President said the pandemic had further underscored the drive of his administration for export substitution initiatives and projects that promote local manufacturing.

On diversification, the President said: ‘‘Gulf countries that have similar levels of gas reserves as Nigeria, have a strategy centered around gas-industrialization as their foundation towards export diversification. This has to be our guiding principle as we seek to attract investment and create opportunities for our people.’’

The President also used the occasion to challenge the private sector to lead the charge in maximising the nation’s gas resources.

According to him the private sector can create a petrochemical hub that will resurrect the manufacturing industry and put the nation on the path to increased self-sufficiency.

‘‘As the world evolves, we owe our people the responsibility to prepare them for what the future holds. We, therefore, must be bold and fearless and can no longer be incremental in our approach.

‘‘Time is short, and our people’s zeal is strong and palpable. Infrastructure development although long, tedious and complex remains a cardinal objective of our Administration’s drive towards ensuring a stable, sustainable and more prosperous future for our citizenry.

‘‘Today marks an important chapter in the history of our great Nation. It marks the day when our domestic natural gas pipeline networks; from Obiafu in Rivers State, Escravos in Delta State and Lekki in Lagos State, are being connected through Kaduna to Kano States thereby enhancing national energy security, creating balanced development, and further integrating our nation,’’ he said.

The President commended the Government of the People’s Republic of China; the financiers the Bank of China and SINOSURE; and the two EPC Contractors (Brentex/China Petroleum Pipeline Bureau-CPP Consortia and Oilserve/China First Highway Engineering Company-CFHEC Consortia) for their support to deliver the important project.

He also congratulated the Ministry of Petroleum Resources, NNPC and all relevant stakeholders on the historic and epoch-making occasion, commending the resilience of the team to deliver on the project despite the COVID-19 pandemic.

The President appealed to Governors of Kogi, Niger, Kaduna and Kano States as well as the Minister of the Federal Capital Territory to provide the enabling environment and support for the project.

He said the EPC contract for the 614km AKK gas pipeline project was awarded at a total contract sum of US$2.592 billion to Messrs. Oilserv Plc/China First Highway Engineering Company (Oilserv/CFHEC Consortium) for the first segment covering 303km.

According to the GMD NNPC, Messrs. Brentex Petroleum Services/China Petroleum Pipeline Bureau (Brentex/CPP Consortium) got the contract for the second segment covering 311km under a debt-equity financing model with loan from Bank of China and SINOSURE, to be repaid through the pipeline transmission tariff and supported by a sovereign guarantee.

‘‘We are confident that the EPC contractors will deliver the project on time, within budget and to quality/specifications,’’ he said.

Kyari added that upon completion, the project would enable the injection of 2.2bscf/d of gas into the domestic market and facilitate additional power generation capacity of 3,600MW.

Speaking to journalists at the Kaduna site of the project, the Minister of State for Petroleum Resources, Chief Timipre Sylva, noted that the AKK project was expected to give room for the growth of some petro-allied companies in the northern axis of the country.

“This project will take gas from the south to the very end of the north and hopefully when we start production in the north, it will also take the gas production from the north to the rest of the country.

“This is a development corridor and we are expecting all kinds of projects, including fertiliser, petrochemicals, power plants etc. On the back of the project, they are already going to build those plants in Abuja and Kano.

“I must say that this is transformational and we are proud of this flagging off. It’s funded by China and over 600 kilometres,” he said.

Also speaking, the Kaduna State governor, Mallam Nasir El-Rufai, said the project would be endless industrial opportunities to the north, adding that it was in continuation of President Buhari’s oil and gas development vision, which started from his days as Minister of Petroleum in the 1970s

“I recall that Kaduna refinery was established in the late 70s when president Buhari’s was minister of petroleum. He’s back again to bring another transformative oil and gas project to Kaduna state.

“This pipeline will bring gas to Kaduna and Kano, which will enable us build power stations, fertiliser and petrochemical plants. The opportunities are unlimited as it will enable us pass gas to people’s homes so that they will stop using wood for cooking. It will transform the lives of the people of Kaduna,” he said.

created on 2019-06-16T20:29:41+00:00
About Us Disclaimer Refund Policy Get in touch African Music Genres
© Afrotune Cloud - Listen to free music and radio 2021
Next up
This site uses cookies to deliver our services and to show you relevant ads and job listings. By using our site, you acknowledge that you have read and understand our Cookie Policy, Privacy Policy, and our Terms of Service. Your use of our Products and Services, including our Network, is subject to these policies and terms.
Got it